How did February become associated with Hearts, Flowers and Valentines?

So, who was St. Valentine, and why do we celebrate him every February 14 with hearts and flowers? Well, to answer that question we have to go back to the Roman Emperor, Claudius II, commonly known as Claudius Gothicus.

Claudius reigned from 268 to 270.  Not a long reign, but a bloody one, because Claudius liked to wage war a lot.  During his two years, he fought successfully against the Alamanni and scored a crushing victory against the Goths at the Battle of Naissus.  It is possible Claudius gained his position and the respect of the soldiers by being physically strong and especially cruel. A legend tells of Claudius knocking out a horse's teeth with one punch. When Claudius performed as a wrestler in the 250s, he supposedly knocked out the teeth of his opponent when his genitalia had been grabbed in the match.

But I digress.... As legend has it, in the 3rd century, Claudius II decided that single men made better soldiers than those with wives and families, so, he outlawed marriage for young men (as soldiers were sparse at this time and he needed men to serve fearlessly in the army without the distraction of a wife or girlfriend making them homesick). However, Valentine, a priest serving near Rome, recognized the injustice of this decree and defied Claudius by continuing to perform marriages for young lovers in secret.. He was caught and imprisoned. While in prison, so the story goes, he may have fallen in love with the daughter of his jailer, and wrote her a letter signed "From your Valentine." He was beheaded on February 14, around 270 A.D., and Pope Gelasius declared St. Valentine's Day around 498 A.D.

So, Valentine was a true romantic at heart.  But how did the heart become linked with emotion? In China, the heart is related to thought, life, and emotions. It brings together everything from understanding and recognition to the flow of emotions. The Romans thought the heart contained the soul. Before them, ancient Egyptians believed the heart to be the center of emotions — and intellect. And before them all... pictures on cave walls depicted animals with red hearts in the center of their bodies — evidence that even cave dwellers understood the heart's significance.

However, the symbol we now associate as a heart, really doesn't look much like the human heart at all. That leads us to ask how we arrived at such a symbol to begin with.  According to Symbols.com (http://www.symbols.com/symbol/1809) "Specific suggestions include: the shape of the seed of the silphium plant, used in ancient times as an herbal contraceptive, and stylized depictions of features of the human female body, such as the female's buttocks, pubic mound, or spread vulva. A heart is not the only symbol for love."

Hmm.  Not sure the female buttocks to represent St. Valentine was what the church had in mind at all. And, since the Catholic Church recognizes at least three different saints named Valentine or Valentinus, all of whom were martyred, we may ask why do we associate February 14 with St. Valentine's Day?  Though some believe that Valentine's Day is celebrated in the middle of February to commemorate the anniversary of Valentine's death or burial--others claim that the Christian church may have decided to place St. Valentine's feast day in the middle of February in an effort to "Christianize" the pagan celebration of Lupercalia. Celebrated at the ides of February, or February 15, Lupercalia was a fertility festival dedicated to Faunus, the Roman god of agriculture, as well as to the Roman founders Romulus and Remus.


The Roman festival began with members of the Luperci, an order of Roman priests, gathering at a sacred cave where the infants Romulus and Remus, the founders of Rome, were believed to have been cared for by a she-wolf or lupa. Once everyone was present, the priests would sacrifice a goat, for fertility, and a dog, for purification. They would then strip the goat's hide into strips, dip them into the sacrificial blood and take to the streets, gently slapping both women and crop fields with the goat hide. (Lovely, right?) Far from being fearful of the bloody whippings, Roman women welcomed the touch of the hides because it was believed to make them more fertile in the coming year. Later in the day, according to legend, all the young women in the city would place their names in a big urn. The city's bachelors would each choose a name and become paired for the year with his chosen woman. These matches often ended in marriage.

Fertility and marriage, a good combination.  Yup, that story makes me want to hop right into the car and buy a box of candy and a dozen roses.  You, too?

Back to history.  Lupercalia survived the initial rise of Christianity and but was outlawed—as it was deemed “un-Christian”--at the end of the 5th century, when Pope Gelasius (remember him?) declared February 14 St. Valentine's Day. It was not until much later, however, that the day became definitively associated with love. During the Middle Ages, it was commonly believed in France and England that February 14 was the beginning of birds' mating season, which added to the idea that Valentine's Day should be a day for romance.

And we return again to the hearts and flowers decorating the greeting cards of Valentine's Day. Valentine greetings were popular as far back as the Middle Ages, though written valentines didn't begin to appear until after 1400. The oldest known valentine still in existence today was a poem written in 1415 by Charles, Duke of Orleans, to his wife while he was imprisoned in the Tower of London following his capture at the Battle of Agincourt. (I'm not sure what he wrote, exactly, but his poem is now part of the manuscript collection of the British Library in London, England.) Several years later, it is believed that King Henry V hired a writer named John Lydgate to compose a valentine note to Catherine of Valois.

Cards decorated with black and white pictures painted by factory workers began to be created in the early 1800s; by the end of the century, valentines were being made entirely by machine. Sociologists theorize that printed cards began to take the place of letters, particularly in Great Britain, because they were an easy way for people to express their feelings in a time when direct expression of emotions was not fashionable. 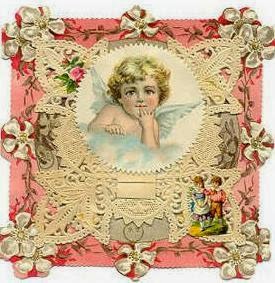 Manufactured cards notwithstanding, increasingly beautiful handmade Valentines were often small works of art, richly decorated with silk, satin or lace, flowers or feathers and even gold leaf. And many featured Cupid, the cherubic, be-winged son of Venus, and a natural Valentine's Day "mascot." Though Venus, Cupid and Psyche's story is too long to go into here, suffice it to say after many trials and errors they end up happily-ever-after, and we continue to celebrate their successful union in our Valentine's greetings today.
Posted by Kathryn R. Blake at 12:26 AM 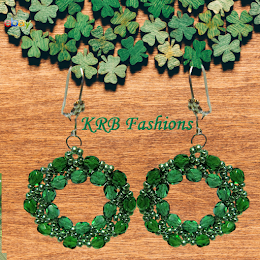